The Game of Thrones Guide to EHS Management 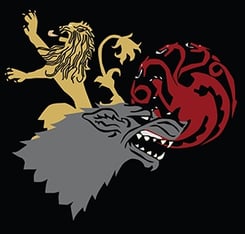 The seventh season of Game of Thrones is set to air this weekend, and fans are anxiously awaiting the coming battle for the Iron Throne. The most recent episode showed Daenerys Targaryen sailing to Westeros with a fleet of ships, finally ready to claim her legacy.

Looking back on the past 6 seasons, it’s clear that characters in this mythical world have a lot to learn when it comes to health and safety. Today’s post is a fun take on this concept, with key lessons in Environmental, Health and Safety (EHS) management we can all learn from watching Game of Thrones.

If there’s anything we know about Game of Thrones, it’s that you can’t take safety for granted. From the first season, we’ve seen everyone from the Hand of the King to a former prince to members of the Night’s Watch suffer serious head injuries. While some are handed out as formal punishment (not recommended), many are prone to occur in the pitch of battle.

The lesson? Personal Protective Equipment (PPE), in particular helmets, do no good unless people are consistent about wearing them. In the workplace, it’s not uncommon for people to occasionally forget a hardhat or protective eyewear (especially visitors).

But it only takes one slip-up for an injury, which is why it’s critical that everyone is vigilant about wearing the appropriate PPE—and not being afraid to point out when others aren’t wearing safety gear.

One of the most memorable scenes of the series occurs when Cersei Lannister destroys much of King’s Landing by igniting a cache of wildfire (a flammable liquid) beneath one of the city’s central buildings on the day of her trial.

True, Cersei is evil and is obviously unconcerned with the traditional precautions one would take to avoid a hazmat incident. That said, it’s unclear how she procured such large volumes of wildfire, begging the question of whether the city had proper storage and security measures in place.

Several steps could have prevented this tragedy:

The Power of Good Training

Similar to other epics like Lord of the Rings, one of the lessons Game of Thrones teaches us is not to underestimate the little guy. In the series, we see many unlikely characters transformed into capable warriors, all through the power of a robust training program.

Like Arya Stark, who starts training with a sword as a young girl and ultimately becomes an elite fighter under the faceless men. Or Samwell Tarly, a pudgy outcast whose training with the Night’s Watch allows him to save a young woman and her child from a white walker.

It all goes to show that you can’t judge a book by its cover. And, with the right Employee Training tools that ensure compliance and effectiveness, anyone can become a rockstar team member.

Daenerys Targaryen is undoubtedly one of the most powerful characters in the entire series. Starting off as little more than an exile and a slave to her brother’s ambitions, she built a movement by giving others their freedom back. She’s strong when she has to be, and she certainly doesn’t back down, but her more diplomatic style of leadership is what makes people love her.

The lesson for the EHS world? True leadership isn’t about bending others to your will, and people aren’t going to follow you if don’t treat them with respect. When you give and take feedback graciously, when you’re willing to roll up your sleeves and do the dirty work yourself—that’s how you build loyalty.

Throughout the ups and downs of the series, the drumbeat of doom never ceases. “Winter is coming,” people warn each other, presumably speaking of the invasion of zombie-like white walkers from the north beyond the Great Wall.

It’s a lesson to us all that no matter how sunny things seem or how caught up we get in our daily problems, risk is always lying beneath the surface. The only way to stay ahead is with proactive Risk Management, moving beyond one-off risk assessments towards closed-loop process that continuously reduces risk over time.